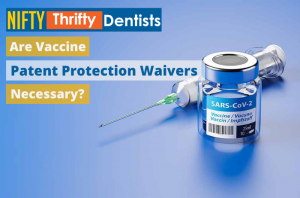 In a move that will no doubt make history, the government of the United States has officially decided to waive patent pending protections in an attempt to bring the Covid-19 pandemic to an end. But the decision definitely isn’t one that is supported by everyone, and the government has already received a great deal of pushback, not only from individual citizens, but also from pharmaceutical companies and politicians. Many other countries, like Germany, also do not support the decision. But why is this decision so controversial, and what are the pros and cons of Vaccine Patent Protection Waivers?

What are Patent Protections?

Patent Protections, more commonly just referred to as “patents”, are something that the government gives to protect the property of an inventor or creator. When a product has a patent, the creator of the product has the sole rights to it. This means that no one else can recreate it or sell it unless you give them permission to do so. A patent is designed to safeguard property so that no one else can make money off of it. The reasoning is by offering these patents, it encourages innovation and incentive for individuals and businesses to take on risks in return for potential financial rewards.

Why are some Countries Waving Covid-19 Vaccine Patents?

Like most vaccines and medications, all Covid-19 vaccines have their own patents so that they cannot be recreated by others. But some countries, like the United States, want to waive these patents in hopes of bringing the Covid-19 pandemic to an end. The idea behind this is that by waiving patents, these vaccines will become more accessible and any barriers to production of the vaccine will be overcome.

It’s also believed that if patents are waived, production and supply of the vaccines will be ramped up. This will speed up the process in which vaccines are available, thereby getting more people vaccinated in a shorter period of time. In return, the pandemic can come to an end more quickly.

So what’s the problem?

A light at the end of the tunnel is what we’re all searching for in this pandemic, so why is the idea to waive vaccine patents met with such resistance by so many?

It really comes down to capitalism. Patents are how pharmaceutical companies make money. When there is a patent on their medication, it means that they have the sole right to distribute it. And that’s how they make their money.

But if you take these patents away, now other companies also have the ability to make money off of the same vaccine. The company that discovered the vaccine loses profits.

Of course, right now isn’t the time to be thinking about profits. It’s a time to be thinking about the health of our people. But many people fear that if patents are lifted, pharmaceutical companies will not be motivated to search for solutions in future pandemics. After all, if they aren’t making money off of their vaccines, what motivation do they have to put money into the research?

Many people also argue that patents aren’t the main problem when it comes to distribution of vaccines. Even if patents are waived, many countries will still not have the supplies, ingredients, or professionals to properly generate the vaccines. Rather than focusing on waiving patents, perhaps we need to place a bigger focus on supply and demand.

Unfortunately, none of us really have the answers when it comes to the Covid-19 pandemic. We are all just doing the best that we can to help bring this to an end. So whether you are for or against waivers, let’s just remember that we are all entitled to our own opinions, and we are all eager for the same solution at the end of the day. Working together will be what brings the pandemic to its final end.