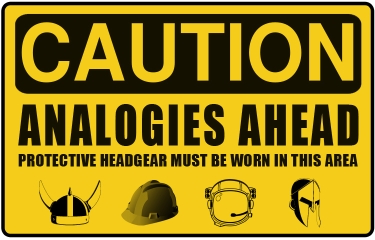 Perio – once I’ve shown them the rough calculus all over their teeth “it impossible for you to keep these teeth clean at home. It’s like trying to clean an old cast iron skillet vs a new teflon coated one”

SRP “it’s like trying to get the rust off your car by going through the car wash – it’s not going to happen. If you don’t get the rust off it keeps eating away but it takes more than a wash and wax”

Decay: “it’s like finding termites in your house. The quicker you get them out and the less damage they have a chance to do the better off you are. They just keep eating until you have no house left”

Parent asks if kid should see ortho when they have decent esthetics: “it will help to align everything and get the bite right. Teeth wear a lot better if they are properly aligned. Just like tires do if your car is aligned.”

It’s only a jaw tooth do I really need it?: “every time you bite you put a lot of pressure on your teeth. It’s a big heavy load. Picture if you have 14 men carrying a heavy load and the back teeth are the really strong guys. If one of them goes and we don’t replace it each one has to make up for it. If we lose too many the weak front ones will go quickly”

My teeth are going bad I’m thinking I’ll just have them all pulled: “it’s like if your knee was going bad and you just decided to amputate. It’s an option but then you have to deal with a prosthetic leg the rest of your life. It never feels like your real leg.”

The need for flossing: Imagine you made meatballs every day three times a day and then imagine you washed your hands like this (I rub the backs and fronts of my hands together with the fingers closed) Now imagine you did this for thirty days, what would it look like between your fingers? Your teeth are like your hands making meatballs every time you eat. If you are not flossing, what do you think it looks like between your teeth?

A root canal tooth is like a twig thats fallen off the main tree. It’s dead and dry from the inside, you can snap it easily. Thats why you should put a crown on it.

for those who want a prophy when they need SRP…. imagine having a 6 ft tall trash can and only emptying the top 2 or 3 feet for a few years!!

You remember those deep, 6mm pockets we talked about? That’s like you having a 6′ tall trashcan that is overflowing. And you’re asking us to remove the top 2-3′ of trash and tell the insurance company that it’s empty…”

“If you wait until it hurts that’s like waiting to change the oil until your car is smoking. It’s a little late then”

When the pt. Doesn’t want X-rays I’ll tell them “is like going to the mechanic and asking to check and fix your car without opening the hood”

Leaking crown or filling: you know how sometimes you have a bathroom tile that has a little bit of grout missing? You decide to replace the tile, you remove the tile, and there’s a ton of damage under the tile where the water has been leaking for years under the tile. Well the space between the filling and/or crown and the tooth is the grout line. Your saliva is the water. We take out the filling/crown and BOOM! It’s a mess under there.

For extracting a tooth, I usually use a baseball (or soccer, or football, whatever they like) team analogy. If one team is missing their first baseman, it becomes very hard to win the game because the other players all have to do a lot more work.
2- dentures are easy. I tell them dentures are like a prosthetic leg. You aren’t going to run a marathon with one, and you aren’t going to wear a bathing suit at the beach and have everybody think it’s a real leg. But it’s a lot better than hopping around on one foot. So, dentures are for people with no other choice

When selling endo or implant… “Say you were driving down the street and all of a sudden your transmission goes out. Your faced with a $2000 repair or maybe you decide to give up and buy a new car. Only, this is your body… you’d spend it on a car…

Unreplaced Missing teeth are like when you pull a book out of the middle of a bookshelf and everything else collapses around the space.

When a patient asks how much time they have to take care of treatment…”Its like asking how long you can sit on a broken chair. You can see it’s broken and that it’s going to give way at some point but it’s impossible to tell if it will break in the next minute or next month.”

Calculus/tartar is like a splinter that has been stuck in your skin. If you leave it there, the skin will swell hurt and bleed. That’s what’s going on in your mouth

Insurance is like getting paid in gift cards and a Membership to Costco. Prices are pretty affordable and you can find something for most occasions. But sometimes, the things you need aren’t available and you have to decide if you’re willing to venture out and pay out of pocket.

Sadly, your plan is more like a Discount Membership to 7-11. Your options include only the most basic of needs.