How to Build Trust with Your Patients & Boost Case Acceptance 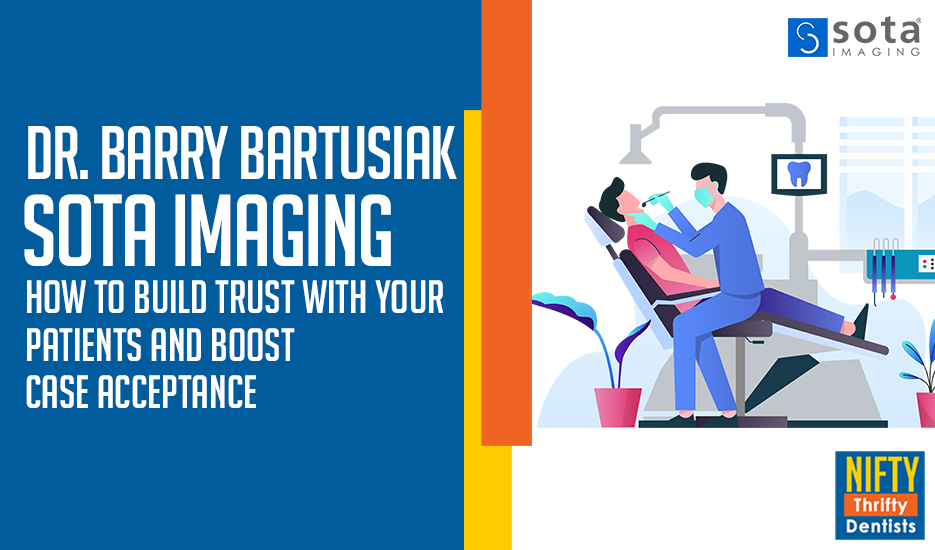 If you’re a Ravens fan or a Browns fan, I have some bad news for you.

I know your teams have a rivalry with the Pittsburgh Steelers, and you’d rather see one of their players have his teeth knocked out than score a touchdown on your guys. Well, here’s the kicker: this week, one of my guests was once the team dentist for the Steelers. You can pin the blame on him for making sure their teeth were in good shape to get those spaghetti dinners before the big game. You can also count on him for being the reason they often wore wide-toothed grins after putting some points on the board.

I myself am a huge football fan—I wrote an entire Christian Romance novel that revolved around the sport. It’s one of my prouder accomplishments, entitled 2612 Cherryhill Lane. If you’re looking for a lighthearted read, check it out here.

Barry isn’t the first football-related guest I’ve had on the podcast either. Many of you know my buddy Aaron R. Boone, who was once an actual player in the NFL. Nifty Thrifty members far and wide work with his company, MVP Mailhouse, to create stellar direct mail campaigns for their dental practices.

The other guest this week wasn’t Aaron, but he’s surely a familiar face: Albert Kim. He was new to the group not too long ago, but he and the company he represents, SOTA Imaging, have emerged as a champion for our community over the course of the last few months. Albert is the VP of Sales & Marketing over at SOTA, and he’s appeared on numerous episodes by now, gaining a reputation and earning the love of the Nifty Thrifty community.

Even though Barry is new, you may have seen him speaking elsewhere. As a renowned speaker and practicing dentist, he’s already made his rounds in some dental communities. Albert is actually the one who connected Barry and me, and he’s taught me a thing or two about case acceptance since.  I’ve learned that Barry is the authority when it comes to building trust with your patients as well as boosting case acceptance—something I wholly believe every dentist could benefit from. 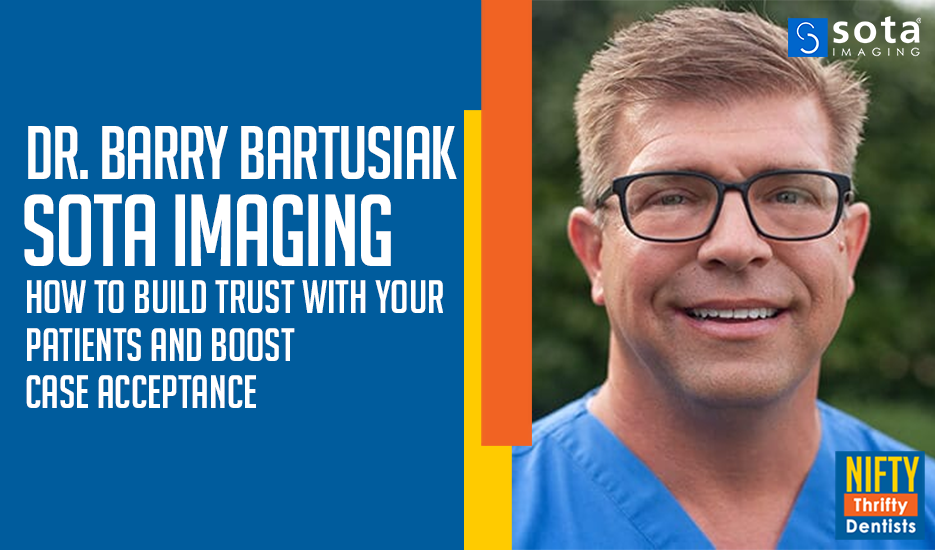 Barry has a unique story, too. His father was a farmer and his mom was a school teacher. He grew up in the hills of Western Pennsylvania, thirty minutes west of Pittsburgh, in a little town called Washington. After choosing to pursue the path of dentistry, Barry eventually opened up a practice in his own hometown. On top of being the team dentist for the Steelers, Barry has also been privileged enough to travel the world. He’s attended over 550 seminars with his brothers and sisters in dentistry.

Barry thinks many dentists struggle with case acceptance because of a lapse in education, and I definitely agree. He believes that when dentists come out of dental school, we’re 100% trained to be dentists but—in most instances—we’re 0% trained to be small business people. Thus, when we open up our first dental practice, it’s very much a matter of sinking or swimming. That’s not to mention that many dentists today are graduating with enormous debt, which makes it harder than ever to stay afloat.

Having poor case acceptance rates goes beyond faltering profit margins, though. It means our patients go without the treatment they need, not to mention that it can be a blow to our self-esteem. To Barry, what gets measured gets managed. That’s why he tracks his case acceptance rates every day, working to make any pivots to increase his already incredible rates. That said, Barry’s role in the case presentation process is very minimal. He’s mastered the art of getting patients to trust him; they don’t need to be “persuaded.”

There’s a reason Albert hopped onto this week’s episode, and it has to do with the fact that a high-quality camera can do wonders for your case acceptance rates. That’s why Barry and Albert’s team over at SOTA Imaging have partnered up for this week’s Nifty Deal.

If you don’t know about SOTA yet, their acronym stands for “State of the Art.” They’ve designed all sorts of optics for various industries—Medical, Aerospace, etc.—since 1993. About ten years ago, SOTA segued into dentistry. With the production of SOTA’s proprietary cameras such as the Claris i310, one of the first USB intraoral cameras on the market, and the award-winning Claris i4D, SOTA has developed the technology—from optics to ergonomics—to provide dental practitioners with the most advanced intraoral camera to date: the Claris Intraoral Camera.

Since its early days, the Claris camera has come a long way. Recently, they’ve decked out their product line even further by adding an all-new all-aluminum model: the Claris i5HD Intraoral Camera. If you aren’t familiar with the Claris camera, it’s a beaut with an adjustable focus that trumps its competition. There’s nothing cheap or plastic about it, with industrial-level technology that’ll last years and years to come. In fact, the Claris camera can get you down to 2mm away from the surface of whatever you’re trying to take a picture of.

And let’s not forget about SOTA Imaging’s fully-integrated Clio Digital X-Ray sensors: the Clio Prime and Clio Pedo sensors. These puppies are produced in a foundry where they have to produce silicon wafers—they’re rare, with only so many in the world. And, to add a cherry on top, these sensors are upgraded versions of other high-end dental technology (such as the Dexus Platinum). With such sophisticated technology, it should be no surprise that both of these sensors are equipped with next-gen CMOS fiber optic technology with Csl Scintillators. This allows SOTA to provide dental practices far and wide with the largest active area plates in the industry.

There may be a staffing shortage thanks to the Great Resignation. Many of us are still recuperating after coming through the pandemic. But Barry thinks right now is a very exciting time to be a dentist—especially with all of the constant innovation coming down the pipeline.

I totally agree. There are always going to be obstacles for any dentist to overcome, after all, which is why it’s so important for us to nail down the fundamentals of our practice. And much of the fundamentals of any dental practice—small or large—will go back to case acceptance: everything starts with a sale.

So, what’re you waiting for? You can find Albert in the Nifty Thrifty Facebook group. Even better, Barry provided his private cell phone number as well as his email. You can reach out to him at 724-255-1115 or [email protected]. He’d be happy to provide guidance, answer questions, or do whatever else he can to help.