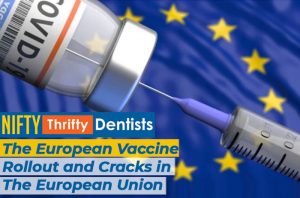 Historically, the European Union always had comprehensive government-funded health systems and a very powerful pharmaceutical sector. However, the coronavirus pandemic has managed to show the cracks the EU has in their health system. In the past few weeks, we have read all the issues that Europe is facing with rising numbers in France and Germany along with other countries. This rise in numbers is more puzzling as several vaccines have been distributed.

There are many reasons why the mass vaccination program of the EU has struggled. First of all. There was confusion and chaos with the vaccination plan. There was no unified plan. Then the EU got into a very public spat with AstraZeneca and the UK. The EU threatened to ban exports of the vaccine while the UK shot back and threatened to ban the raw materials to make the vaccines. This the UK look bad but made the EU look even worse as a bully.

So the EU member countries couldn’t manage to immunize the population fast enough. Hospitalizations increased and lockdowns were implemented or extended. This just caused a distrust of the government and more public anger which was evidence in the mass demonstrations all over Europe

How did the UK manage to immunize its population?

One of the challenges that the European Union had to deal with is the massive amount of bureaucracy inherent in this centralized governing system. In order to get anything done, there are a lot of red tape that has to be navigated. Since the UK doesn’t have to deal with the bureaucracy between countries, it all came down to the local and one centralized government to optimize and adapt the vaccine rollout to the country’s requirements. This is why the UK program is working a lot better, and we can see the differences in the number of people that get sick every day in the UK when compared to the EU.

Why is the European Union a lot slower?

The EU treaty allows for a generalized framework for governing. Because of that, the national healthcare systems are differing in responses. Some governments don’t have the capacity to enlist healthcare providers and pharmacies to administer vaccines all over the EU. The EU has to work to distribute vaccines evenly to the member countries while balancing that with hotspots that can easily spill over to the rest of the bloc.

On top of that, the delay in vaccine deliveries have caused countries to go out on their own to get vaccines that were not approved by the EU regulatory boards. There are stories about countries reaching out to Russia and China for vaccines as they are so desperate. AstraZenca has encountered some negative news regarding blood clots and that has only added to the vaccine hesitancy among the Europeans.

Does this mean that the EU model is not viable in the long run?

While the European Union does come with advantages, it also has plenty of downsides. Right from the start, the main issue is that any situation where you need a quick solution (like a pandemic) ends up postponed due to the bureaucracy. There is squabbling between the individual countries. Even though theoretically, it is one union, the politicians are still accountable to their own citizens. That is a tough juggling act. On top of that, the EU has to negotiate for all countries, whereas the UK just had to negotiate for their own vaccines, which is a lot easier. In this situation, the EU model is failing.

The pandemic has highlighted the weaknesses of the EU model of government. The EU must make changes in its government structure and reduce bureaucracy if it hopes to forge towards a strong and  unified Europe. If not, more EU countries will follow the UK sooner rather than later!