Why every office in America should do direct mail in January! 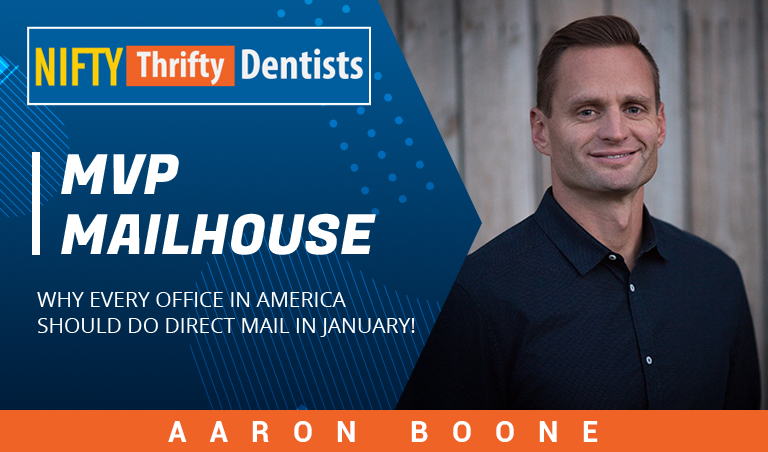 Recently, I was talking with Aaron R. Boone—CEO of MVP Mailhouse—and I suddenly realized it had been a while since I last had him on the podcast. More importantly, perhaps, is the reason we were speaking with one another… Aaron and I were discussing the fact that we’re hitting the peak season for direct mail.

Thus, Aaron agreed to hop on for another episode of the podcast—time was of the essence, after all. I had to bring out my ugliest sweater for this week’s episode, but, coming from a pro-football-player background, I’m not surprised that the dude came to compete.

He also rocked his ugliest sweater, and it’s hard to say whose sweater was the ugliest. Speaking of “pretty,” I’m going to get real with you: I used to design my own mailers. I’d go on Fiverr and I’d try to be Picasso—it wasn’t too pretty. But then I found Aaron, and I realized that I simply wasn’t doing the job right. This guy puts together some really pretty pieces of paper, to say the least, and he designs them in a way that really resonates with those patients you’re getting in front of.

While we’re on that note, I also used to think that the best way to do direct mail was just blanketing the letters across wide swaths of areas. Big mistake. An even worse mistake? I had my team literally walk the letters down to the mailboxes. I thought I was saving money but, in reality, I was getting no ROI—an issue that dentists often run into with direct mail that’ll stave them away from doing it altogether.

Direct mail is one of those marketing strategies that’ll get a mixed response depending on who you talk to. But, let’s face the facts: data shows that, when deployed properly, direct mail marketing works. Social media and other more “modern” campaigns might make direct mail seem obsolete but, the reality is, neglecting direct mail means you’ll neglect an entire audience of prospects.

You can’t expand your pool of patients if they exist in the same circle. If you keep sending ads to the same folks on the same channels, you’ll end up losing out with all your eggs in one basket.

There are a number of variables in any marketing campaign, direct mail or not, and the floodgates never open on their own—it’s up to you to lead prospects to your business. And, without Aaron, a direct mail campaign might conduct nothing but a reckless blitz with mailers being sent to businesses, not leads.

Again, we’re hitting the peak season for sending out mailers. In other words, a big season for direct mail is upon us. It’s a prime opportunity to take advantage of it as a marketing strategy, especially if you haven’t utilized the new technology that deems it a far cry from the “old-school” approach many dentists believe it to be.

Marketing opportunities aside, January is usually a big month for practices. According to Aaron, there are two reasons why:

Naturally, Aaron believes that now is the time to get in front of patients. But direct mail might sound ancient or even spam-like to many of us; a lot of dentists have tried mailers only to find they didn’t work. However, data and analytics have entirely changed the game. MVP Mailhouse has been a Nifty Thrifty partner for years now, and it’s been a great partnership. Tons of our members use their services, and it creates “win-win” scenarios across the board.

Aaron has been in the direct mail game for longer than he was a pro football player. He played football for nine years but has done direct mail marketing for 12-13 years. Aaron tries to incorporate much of the skills he learned from football into his direct mail marketing tactics. After years of reviewing statistics and highlight reels, Aaron has learned the art of studying (and learning from) past errors and future opportunities. That’s why he improves MVP Mailhouse by measuring prior campaigns and improving them based on how well they’ve performed.

That’s why MVP Mailhouse’s biggest boast is their “Better Technology.” Geographical insight—or “heat maps”—can help you play to your strengths. MVP Mailhouse identifies hotbeds and pinpoints communities that can be drawn into your practice by direct mail, making it easier than ever for you to pursue leads.

In fact, tune into this week’s episode to watch Aaron and I walk through the free “Heat Map Analysis” only offered to Nifty Thrifty members. I truly believe that there’s no better man to guide you through the process than Aaron. He and his team are super streamlined—they only work with dentists and only do direct mail—and, as I myself can vouch, they have results to show for it. Before you say that direct mail didn’t work for you, maybe you should consider whether you were working with the right people and/or the right systems. The problem was likely how randomly they did things. But, through Aaron, direct mail is a promising strategy.

I think the highlight of this week’s episode is Aaron’s new phone service. Aaron and his team have been listening to calls for “years and years and years,” and they’ve gained quite a bit of “know-how” in the process. Lo and behold, MVP Mailhouse is happy to introduce its all-new “MVP Call Pro” service for only $199/month. Through this service, Aaron and his team will listen to entire recordings—whether they’re five minutes, 30 minutes, or more than 60 minutes—before breaking them down and grading them. They’ll give you real-time feedback on how your front desk team is performing.

Let me tell you… You could be the best dentist in America but, if your front desk isn’t closing deals, then you’re at a big loss. You just won’t reach your full potential, it’s as simple as that. And, the worst part is, you won’t even know it. You’re busy operating on patients who are sitting in the chair; you have no clue how well they’re handling phone calls up at the front desk.

Also, visit our special landing page at www.mvpmailhouse.com/ntd, email Aaron at [email protected], or call him at 801-953-6771. Aaron and his team over at MVP Mailhouse will be more than glad to help you out!

Learn about:
Why is it an optimal time to utilize direct mail?
What does the New Year mean for direct mail campaigns?
Why was this November the best month Aaron’s company has experienced in its entire history?
Why should you not take the DIY approach with direct mailers?
Why does design matter when it comes to direct mail? And why is Aaron’s company so great at the design game?
What tips does Aaron have to offer for your front desk when it comes to handling phone calls?
How has MVP Call Pro helped Aaron’s clients?
Why does Aaron offer “expert advice” through his veteran team?
And more!